This may seem like an odd topic for The Westside Gardener at first glance; but I'd argue it makes perfect sense. A lot of us gardeners are also photographers, since we tend to be tuned in to the beauty of the world around us. And, if you've purchased a digital SLR in the last couple years - or even a mid-range point-and-shoot camera - you've likely played around with (or at least heard of) RAW files.

This article briefly discusses two new tools for the RAW shooter, from the point of view of a someone who is definitely not a pro, but who definitely wants to get the most out of his camera.

Note: This article was written in 2006, and compared Aperture 1.1 and the final pre-release version of Lightroom 1. The general discussion of program philosophy is still relevant, but most of the comments regarding specific tools is quite dated (my critical comments about cropping in Lightroom, though, are unfortunately still applicable).

I still prefer Aperture, but both programs are up to version 3 now.

Shooting in the RAW

As many of your know, a RAW file is simply the unprocessed data from your camera's digital sensor. It hasn't been sharpened, exposure compensated, compressed, or adjusted for a specific white point. RAW files aren't actually a single file type, since they are dependent on who exactly made the camera and its sensor (Nikon RAW files have the extension .NEF, Canon's are .CRW or .CR2, and so on). Unlike a JPEG, a RAW file contains 100% of the data your camera gathered on that particular shot.

Unfortunately, there hasn't been a really good way to really work with these files. The best tool available to most of us has been Adobe's Camera RAW (part of Photoshop); but that is a one-shot converter that turns your RAW data into another format, such as TIFF or JPEG.

Recently, though, this has changed - first with Apple's Aperture, which was followed closely by the beta release of Adobe's Lightroom. While both of these applications can work with the more traditional JPEG or TIFF files, what sets them apart is their ability to work on RAW files throughout. Additionally, both are designed with the photographer in mind; unlike Photoshop, which is a great tool but serves many masters.

First, a side-note: Aperature 1.0 was a slow, broken, problematic beast. Fortunately I didn't buy the program until it hit 1.1 (not just because of the fixes, but also the 50% price drop!). Lightroom beta 1 had some gaping holes as well... but then, it was a beta after all, not a released product.

It is not my intention to go into great detail on either product, since many others have already done so (e.g. ArsTechnica's reviews of Aperture 1.1 and Lightroom; the Imaging Resource; and of course Slashdot.) I just want to hit on a few things that have stood out in my mind.

While both advertise themselves as "pro" tools, it is quite obvious that they are also after what is commonly called the "pro-sumer" (or "serious amateur", as it was known in the days before buzzwords became mandatory) market. So far Lightroom hasn't really shown what will make it useful specifically to the photography pro; but I'm sure Adobe has something up its sleeve.

Fundamentally, Aperture and Lightroom do much the same thing. RAW files are edited non-destructively, meaning the base image (the "master") is not touched. All the changes you make are stored as a series of instructions in a database. This does save space; but more importantly it allows you to undo any number of previous edits at any point in the future. Aperture takes it one step further, and lets you have multiple "versions" of edits - basically different sets of edit instructions that are based on the same master image.

Both Lightroom and Aperture offer you the editing tools you'd expect - crop, straighten, sharpen, correct white balance, red-eye reduction (a decidedly non-pro feature), adjust exposure, and so on. They both have systems in place for applying keywords and ratings to your photographs. 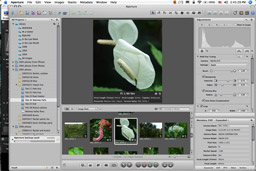 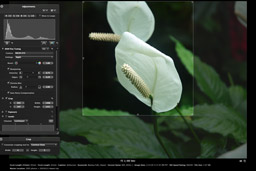 Doing a crop in fullscreen mode

If you've used any of Apple's software programs in the past five years, you know what they excel at: Apple knows how to put an intuitive yet powerful interface together. You can sit down with Aperture and immediately begin editing. Importing photos, cropping, making adjustments - it's all very straightforward. I love how easy it is to adjust the white balance on the fly (it's a minor thing and not usually necessary for most outdoor photographs, but it let me zip through a lot of photos I'd shot at a work event recently).

Aperture also includes a few features (e.g. "Stacks") that are definitely aimed at high-throughput professional photography - which of course are of little use to someone like me!

The biggest downside of Aperture is its stringent resource requirements - version 1.1 is frequently sluggish on my 1.25 GHz Powerbook, which is right at the low end of the hardware on which Aperture will even run. Unless you have one of the newest Macs, you'll find one or two features painfully slow - the straightening tool immediately comes to mind. There are also a few holes left to fill. I was quite surprised to find no way to edit the EXIF date information on my photos. This is a problem since most of my Hawaii photos were shot with the camera date exactly one day off - certainly that was my own mistake, but it's a common one people make.

One important, and probably obvious, point is that Aperture will almost certainly be only available on the Mac platform. For pro photographers this isn't a big deal, since (like most of the creative community) they are heavily in the Apple camp. I suspect Apple is hoping Aperture may help nudge some of the rest of you over to their side as well.

And then came Lightroom 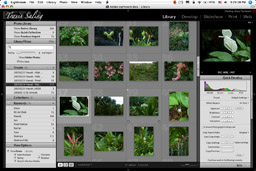 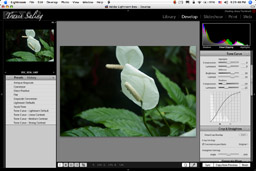 Adobe has made Lightroom available to the world as a public beta, almost certainly in an attempt to delay the mass adoption of Aperture by photographers before Lightroom is released ("public beta" and "Adobe" are hardly synonymous). They may very well succeed in that, because they've crammed a lot of power into this program.

I am especially impressed with Lightroom's "Tone Curve" tool. It basically provides all the power of Photoshop's Curves, but in a way that makes it easy to use - I say that as someone who's wrestled with Curves many times, but has yet to win. I would dearly like to see this interface in the next version of Photoshop. Tone Curve is a definite step above the comparable tools in Aperture's kit. While there's only so much you can do to salvage a technically flawed photo, it's nice to have the best tools possible at your disposal.

Unfortunately, Adobe has made some mystifyingly cryptic decisions with other parts of the interface. The crop tool, for one: Unlike every other program out there - including Adobe's own Photoshop - you have to move the photo underneath the cropping rectangle, rather than moving the rectangle around on the photo. Additionally, actually applying the crop is mind-achingly obtuse (unchecking the "Show Crop Overlay" box does the trick). It's also bad design to require a crop box to be selected before you can apply any rotation/straightening to the image - this again runs counter to the way other programs (including Photoshop) work. However it DOES work acceptably on my laptop, unlike rotation under Aperture.

In the end, I felt like certain elements of Lightroom kept getting in my way, rather than helping smooth my workflow. We'll have to see what happens with the final product, however.

Lightroom is currently only available for Mac, but will eventually run on Windows as well.

I must admit to a strong bias towards tools that get out of my way and "just work". This is what pulled me over to the Mac side in the first place, after so many years using Windows and then Linux. So, for now, my nod goes towards Aperture and its superior workflow.

With Lightroom still being in beta - and therefore free to use - there is no reason to make a final decision now. While my primary work will be in Aperture, I intend to closely follow any new developments with Lightroom.

I imagine both Apple and Adobe will steal - er, draw inspiration from - the better parts of each other's programs, so in the long run we'll all benefit. In the end, both Aperture and Lightroom will be better tools than each would be if the other didn't exist.