Who's the Guy Behind the Site? 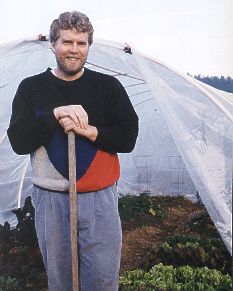 I grew up an Army Brat. Western Washington was always my folks' home base, so to speak, but we lived wherever my dad was stationed. In 1970, when I was 10 years old, we moved here for good. When the Army asked my dad to go to Vietnam for the second time, he chose to leave the service instead, which meant no more moves! All this is to let you know that technically I am not a native (my dad was stationed in North Carolina when I was born), but I feel like one.

As teenagers my sister and I shared a vegetable garden. We weren't very knowledgable about it, but enjoyed it a lot. The division of labor in our garden was as follows: If we found any sort of bug (good, bad or indifferent), Leslie would immediately run out with the can of Rotenone and sprinkle everything in sight. My job was to thin the plants properly, since my sister couldn't bring herself to kill any of them. Weeding, fertilizing and harvesting were shared duties. The highlight of the gardening year for me was digging the potatoes.

I left for college in 1978, and didn't garden for more than a decade. I lived in Seattle, but had no clue that things like P-Patches existed. Actually I did garden a little. This was the period in my life where I learned to kill houseplants; a skill I unfortunately still possess.

Since 1990, my wife, daughter and I have lived near the junction of the Kent, Orting, and Puyallup valleys. We moved here from Seattle in order to live a more rural lifestyle and also to provide a quality environment for our daughter, who was born that year. That also marks the start of my current incarnation as a gardener.

Like many people, I began with a typical corn, beans, and tomatoes garden; but since about 1992 I've been studying ways to extend my harvest, and have become a serious year-round vegetable gardener (and a constant source of nagging to those friends who don't yet grow winter vegetables). As a matter of fact my personal gardening habits have done a 180 - while I do still grow quite a few summer veggies, they're now mostly grown for fun (like my often futile attempts at growing watermelon here) or flavor (sweet corn). It's my winter garden that I take more seriously. If something has to give due to time or space constraints, invariably the summer garden takes the hit - and since I have a day job, gardening time constraints are a given.

The Westside Gardener is the most recent incarnation of my Web gardening presence. I was the first Vegetable Gardening editor over at Suite101.com, writing a bi-weekly column for about a year and a half. Then my friend Debbie Teashon and I decided to leave Suite101, team up and create Rainyside.com. The two of us worked together on that site until June 2003. At that point I decided to venture out on my own - and The Westside Gardener was born!

If you're curious about what I do when I'm not gardening, check out my personal homepage at http://www.salingfamily.net/trav/.