But I Already KNOW How To Grow Snap Beans...

Send questions or comments to . 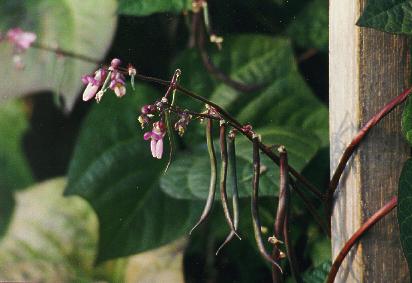 Let's face it, snap beans (usually called green beans at the market) are easy here in the Maritime Northwest. They rarely need any fertilizer, although they may require bone meal if grown on poor soil. We don't usually see bean beetles here. Even flea beetles are rarely bad enough to do more than slow the plants down for a few days. So why bother reading more about beans? Well, perhaps there are things worth discussing.

I think when people up here have trouble with pole beans, it often comes down to soil temperature. The various species of Phaseolus (which also includes most shell and dry beans) all need warm soils to germinate and thrive. If we have a nice sunny week in May you can get away with an early sowing, but if the clouds move in the seeds will just rot. Even if they come up, a cool June can cause them to just sit and sulk. It's been my experience that a mid-to-late June sowing won't lag a May sowing by more than about a week, unless we're having an exceptional early summer.

So many people seem to grow bush beans in their gardens. Bush types were bred to benefit the canning industry, not the home gardener. It's true they don't need to be trellised, but there are some big disadvantages to bush beans for the home gardener. For one thing, they tend to produce all their beans over a very short period. This means that you must make multiple sowings if you want a long harvest.

In contrast, pole beans only need to be sown once. As long as you keep them picked, these varieties will keep yielding until they are killed by frost. Over the course of a season, pole varieties will produce a much larger harvest than bush beans. The best argument, though, is taste. Pole beans are so much tastier than bush beans! Once you try them, I doubt you'll go back.

There are a number of styles of beans to choose from. Everyone is familiar with the traditional round green bean of course. The current "hot" beans are the French filet-style, which are more slender than typical snap beans. Romano beans are flat and broad; many people like their texture. In addition there are wax beans. The real wax types actually have a waxy texture, which can take some getting used to! It is becoming more common, though, for the term "wax" to be used in describing any yellow bean, whether it is truly waxy or not.

A different species of pole bean is the runner bean, Phaseolus coccineus (sometimes called P. multiflorus). These fuzzy-podded types are delicious as long as you pick them before their seeds develop much. The vigorous vines are often more valued for their beautiful red flowers than for the bountiful harvests they produce.

Everyone has their favorite beans, and I am no exception. The old standard Blue Lake is the one to which I make all flavor comparisons. A very pretty purple bean is Trionfo, which is sold by Johnny's Selected Seeds and The Cook's Garden. Trionfo is as tasty as Blue Lake, in my opinion. Johnny's also sells a nice early Romano called Northeaster, which (according to a friend) is identical to Cook's variety Kwintus. Fortex is a very tasty extra-long bean, but it doesn't yield as much as these others. Fortex can also be picked at "normal" length to be used as a filet bean.

Once they start producing they will keep yielding more and more, as long as you keep them picked. This can be an every-other-day proposition at the height of summer! If they aren't picked regularly the seeds will develop, which effectively stops further flower production until those pods are removed. Keep at it though and you'll get an incredible harvest of beans. I plant just 16 row-feet, which provides enough beans (fresh and frozen) to feed my family of three for the whole year.