Cucumbers purchased from the local grocery store are almost always, in my experience, bland and uninteresting. If they're fresh they'll at least offer that wonderful cucumber crunch; but this is one vegetable where there's a clear benefit to growing them at home.

Heat-loving vegetables such as cucumbers, however, are not universally enamored with our typical Pacific Northwest summer weather - and when we have a cooler-than-normal growing season, they may hardly produce at all! So when choosing varieities, the first factor to consider is whether it is reasonably well-adapted to our climate. The ones I'm listing here have all performed reasonably well... as long as our weather cooperated.

As noted in my FAQ Regarding Vegetable Culture, I've found it beneficial to start cucumbers indoors, around mid-May, in 4" pots. As soon as the plants have developed a true leaf, I thin the pots - with scissors - so there's only one plant remaining. The seedlings can grow happily in these pots for three or four weeks, at which point they are carefully transplanted outside at three-foot spacing. Roughly a cup and a half of complete organic fertilizer is dug into each spot before transplanting.

I'm a bit torn regarding trellising, since in our climate there's a bit of a tradeoff involved. The benefit, of course, is that the plants produce straighter fruit that are easier to locate and pick. But in suboptimal summer weather, cucumbers grown under a cloche definitely produce better than ones I've grown under a hoophouse or in the open. I suspect if I was more attentive to keeping the hoophouse ends closed, this might not matter so much - but in summer I mainly think of the hoophouse as a way to keep rain off the plants, and usually keep the ends wide open.

If you do choose to trellis your cucumbers, you will need to assist them by tying the growing stems (gently) to the trellis every so often. Unlike beans or peas, cucumber vines do not naturally follow - or cling to - a trellis.

Without further ado, here are my current favorite varieties. You can click on any of the photos to view a larger version. 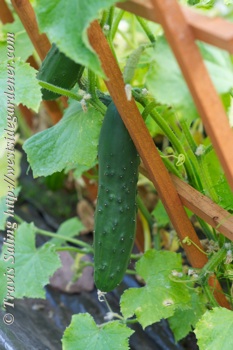 This is the cucumber against which I measure all other cucumber varieties. For me, the tangy flavor and crisp texture of Marketmore 76 pretty much define the perfect cucumber.

The Marketmore series of cucumbers have been offered for several decades with the "number" denoting the year of its introduction - with the 1970 release of Marketmore 70 being the first, to the best of my knowledge. The series has turned out to be very popular among home gardeners, which has resulted in the continued development and release of new varieties - Marketmore 80 and Marketmore 97 among them.

I've tried the newer versions, but I always return to Marketmore 76. The newer varieties have been bred to offer additional traits, such as shorter vines and greater disease or pest resistance, but in my opinion they don't quite have the same flavor as Marketmore 76. We don't generally have significant problems with cucumber diseases other than powdery mildew, and cucumber beetles aren't general a threat here - so I don't care as much about those factors as growers in other regions might.

Marketmore 76 tends to start bearing somewhat later than some other cucumbers, but that can be balanced by also growing an earlier variety. It requires pollination to produce fruit, but the plant bears both male and female flowers - so even if you only have room for one cucumber plant, Marketmore 76 will do just fine. 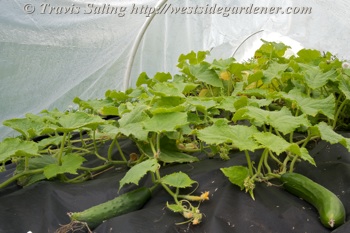 Socrates, growing under a cloche

I tried Socrates for the first time several years ago - I was intrigued by its description in Johnny's catalog as a "Beit Alpha adapted to colder conditions", which seemed to fit the bill for a cuke that'd help me extend my growing season further into fall. It turned out to be a great choice - being both gynoecious and parthenocarpic, it started bearing early in the season and kept bearing until the vines fell apart in October due to low light and cool weather. It also has the nice tangy cucumber flavor I like.

But, the next year, I noticed the listing had changed - Socrates was "not recommended for outdoor production." This was interesting since I'd had no problems with it; but I wasn't planning to grow it that year, so I filled that away with the intention of eventually asking about it.

It turns out Johnny's reason for adding that warning was simply regarding cost - Socrates is definitely quite expensive compared to most other varieties, so they don't consider it a good choice for sowing in the field. Since I usually start my cucumbers indoors under lights, this isn't a significant concern to me... but if you choose to try it, you do need to be aware it's pricey - ten seeds cost almost seven bucks! 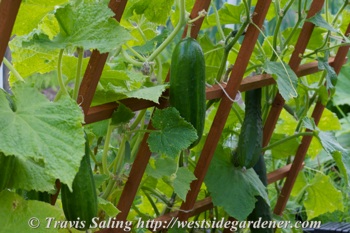 Sultan, with Marketmore 97 in the background

Sultan is another Beit Alpha type cucumber, but it's been specifically developed for outdoor culture. It doesn't have the dark green color that I prefer, looking more like a large pickling cucumber than anything else; but it is early, vigorous, and productive. The flavor is good, but not quite on par with Marketmore 76 or Socrates in my opinion.

I wouldn't personally grow Sultan as my only cucumber; but it's a good choice to supplement a crop of Marketmore cukes.

I briefly touched on the other members of the Marketmore family. If space is an issue for you, Marketmore 86 is a compact alternative to Marketmore 76; and Marketmore 97 is quite disease (and pest) resistant if that's a concern.

Johnny's Selected Seeds developed Diva, an AAS winning, open pollinated slicer that's both gynoecious and parthenocarpic. In my garden Diva has not proven to be particularly vigorous, but I should probably grow it a couple more times to make sure this wasn't just due to chance or bad luck - the cucumbers were certainly tasty.

There's a unique heirloom cucumber named Lemon whose fruit tends to be more rounded and yellow than a traditional cucumber - hence the name. Seed for Lemon is available from most seed companies.

From the Mailbag: I started my squash too early!